Yep it was a song that Johnny Logan won the Euro vision with way back when the dinosaurs still roamed the earth (according to my kids at least!) So here we are in 2019, so Happy New Year to everyone, I hope its a great year for you and your family's. It's almost a year since I moved to Sydney, and I have been a bit quieter here than I was in WA. It take a while to get the hang of the music scene here.

I have also done a few solo gigs around the place, and have ventured as far as Byron Bay for a private party, I am also heading to Bathurst on Jan 05th for another Private party.

​​I have found some great Irish sessions and am frequently found playing in the Fiddlers in Rouse hill, on the first and Third Wednesdays of the month. I have not made it in to the city to some of the other ones but hopefully this year I will do better! I did a few months with the Flying Seamen playing in Randwick, it was great crack but the travelling every Thursday night was getting to be a bit much and along with a few other issues I decided to drop out.

​​I was also home in Ireland in September / October and provided the music for my sister in laws wedding, with Mary Dempsey for the ceremony and with my old buddy Mickey Roache and his new Band International Jam (Mary and Lauree) along with James and Jim. I didn't do much more music in Ireland except I got to see Okkervil River in Galway, my current favourite band! It was lovely to catch up with Cait ,bass player from The Zen Zucchini Experience the college band I was in way back in 1990!

​​I am currently putting together an as yet unnamed folk alt country original band with Shel and Pat and also a folky, Irish band with Pat, also currently unnamed!! We will be playing around Sydney and NSW this year so watch out, might even let you know the group names when we think of them!

Now You Can Blog from Everywhere! 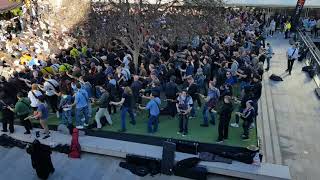 Its Going to be a Busy Weekend!